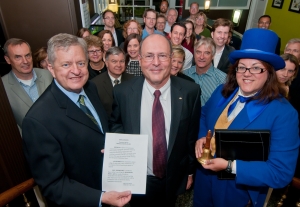 Well, that was quite a night! Starting off with the Mayor, Town Crier, Area Governor, Trafalgar Club President, and members from Trafalgar, Mighty Oaks, and First Oakville crammed into the Quality Hotel Lobby. The proclamation ceremony declaring October Toastmaster Month in Oakville was Pat Lore’s idea and she carried the whole thing off. Then there was the Cogeco FYI interview, also set up by Pat Lore. And then the last at bat for Pat was the notification of the Service Club signs going up on the community boards. Pat is going 3 for 3 and it’s only the first night! And I know she has more stuff up her sleeve.

We had a special presentation to Past President John Smissen in appreciation of his work last year. Gerry Bram received his pin for his ACB, Matt Wagner for his ACG. Then the Area Governor Doug Carr relieved the past executive of their charge and then inducted the current club executive. The executive received TM pins which hopefully will start a new tradition of passing the pins every year.

The current president gave a little thematic speech outlining the wish for every member to pursue Toastmaster Education objectives through the Distinguished Club Program and to Soar to New Heights. And then we broke for a short respite and came back for our usual second half featuring 3 speeches.

OK, OK, some of us were a little rusty from the summer. It’s amazing how quickly the well oiled process can become rusty. The agenda had a few holes in it, but everyone reminded the Chair when things were going off the rails a bit. Gerry Bramm was once again doing Yeoman duty as a Stand Up which added fantastic levity to the evening. All the extra activities and a full regular meeting, and we were only 20 minutes over. Not a bad a start to the year. I hope that everyone enjoyed themselves and that the first meeting will be the harbinger of many more great evenings at First Oakville Toastmasters to come.

Posted on September 8, 2010 by firstoaktm | Comments Off on FYI

October is Toastmasters Month and Don Knowles from First Oakville Toastmasters came by the FYI studio to talk with Joe Ferroni about Toastmasters basics and events taking place throughout the month. TVCOGECO – truly local television on Cogeco Cable.
Please follow the link to watch Donald’s interview.

Comments Off on FYI

Toastmasters Talk of the Town 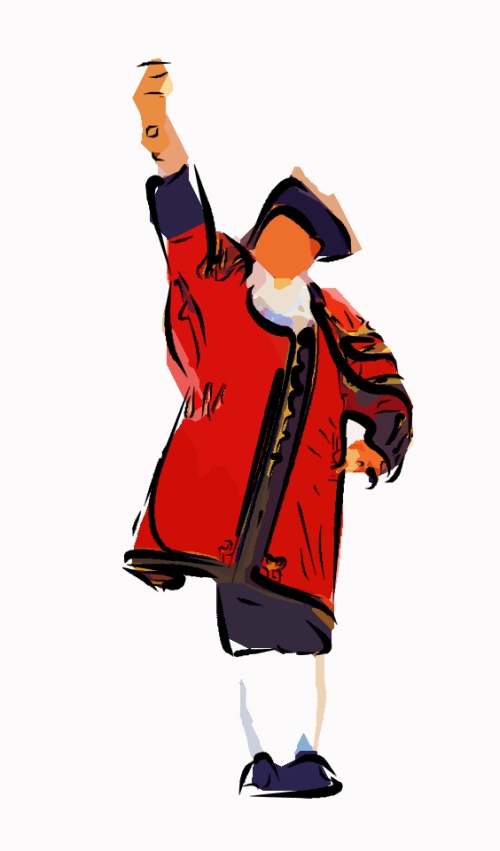 Come One, Come All!

Mayor Rob Burton has very graciously agreed to proclaim October, 2010 as Toastmaster Month for the Town of Oakville.

As a kick-off to the Toastmaster Fall season we have invited Mayor Burton to read the Proclamation at  The Quality Inn (754 Bronte Road-Bronte Road and QEW) on Thursday September 9, 2010 at 7:00pm.  On hand will be Oakville’s Town Crier Chris Pederson-Brown to announce the Mayor. As well, Executive from Toastmaster Clubs in Oakville will attend.
Toastmasters International is a non-profit organization, which has been teaching valuable communication and leadership skills to people around the globe for over 85 years. There are currently over 250,000 members in 12,500 clubs in 106 countries.

In Oakville, Toastmasters clubs have been an active member of the community for over fifty years. Its members take pride in their contributions to the development of skills beneficial to the people of Oakville.